President Barack Obama visited the Yad Vashem World Holocaust Remembrance Center in Jerusalem during his visit to Israel in 2013. This was the message he left in the Center’s guest book:

Nothing equals the wrenching power of this sacred place. If you come here a thousand times, each time our hearts will break. For here we see the depravity to which man can sink, the barbarity that unfolds when we begin to see our fellow human beings as somehow less than us, less worthy of dignity and life; we see how evil can, for a moment in time, triumph when good people do nothing.

Some 4 years later, donald trump followed in President Obama’s footsteps and paid a visit to the Yad Vashem World Holocaust Remembrance Center while on his trip to Israel (which, we learned from trump, is not in the Middle East).

Here is trump’s message in the Center’s guest book (typed to match his handwriting style):

So AMAziNG & wiLL NeveR FoRget!

It was then apparently signed twice by donald trump, until one realized that the second, nearly identical signature, was Melania’s.

This is our president…about to head to the beach and down some brewskis to celebrate his graduation from high school. He’s so glad he got to know us this year. Give him a call this summer and we’ll hang out! 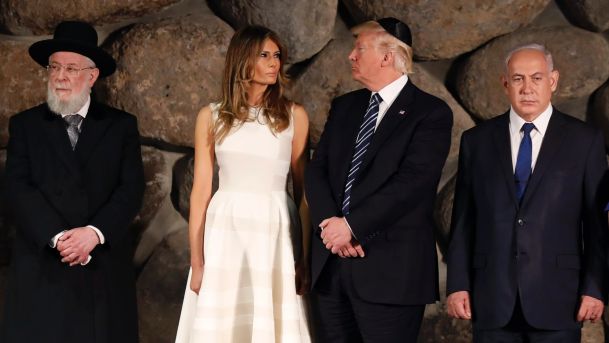