‘Twas optics that killed the beast.

By: Luskus_Delph
In: Uncategorized
With: 0 Comments 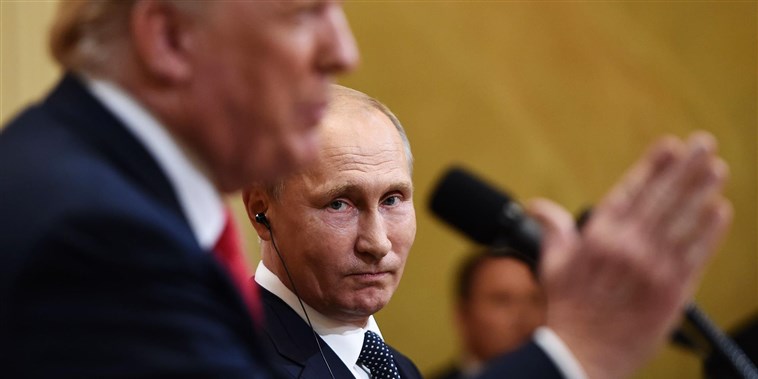 A day that will live in infamy.
It was “surf’s up” for every news outlet with an editorial board.
Oh, let’s give it a name, shall we?  How about:
— “The Fiasco in Finland”
— “The Stinky in Helsinki.”
— “The Treason Summit.”
Morning-after parade of headlines from around the globe.
—  Putin scores hole-in-one at The Collusion Open.
—  Putin to Apprentice: “You’re Hired”
—  Kyrie eleison. Miserere nobis

Since I can’t be everywhere at once, I have to assume that some astute commentator* has pointed out by now, that Trump neither said anything, nor did anything in Helsinki, that he has not been saying and doing since he entered Presidential politics.  Nothing at all new was revealed by Trump that we did not already know.  Think about that.

Before POTUS could get Air Force One off the ground in Finland the collective force of opinion punditocracy was on fire with indignation, shock and awe, and near universal condemnation.

The GOP establishment and its entire base has supported and enabled Trump’s footloose madness every step of the way.  For over two years, the news media has huffed and puffed and blustered its way into normalizing the worst damage that Trump could inflict upon his office and upon our Constitutional standards and virtually every government institution that serves to protect our Republic.  He has done this under the taciturn protection of a GOP dominated Congress and with the enthusiastic approval of authoritarian brats who, in the throws of an epic petulant snit, cast their punishing votes for the institutional chaos that culminated in that horror show in Helsinki.  Never truly being held to account for the runaway Rolling Thunder Doomsday Machine that they spent years building, refining, and servicing.

International chapters of the Fourth Reich and Trump’s cult of cognitive misers all deemed him a Great American Dream Machine, nobly clanging forth into a cacophonous fray.  It is so hard keeping up with the tonnage of Rube Goldberg mechanical gizmos and the grinding decibels of coil-spring ping-age and boing-ery and menacing claptrap that defines this tribal steampunk juggernaut, that it is easy to miss occasional yelps of incompetent handlers who get dragged under its carriage.  Well you American Idiots built this monstrosity and unleashed it on the world order.  Today the world is finally demanding that we deal with it.

So now one must ask the question of the day; “What the fuck?”

The apparent answer to that question seems to be that POTUS made the gross miscalculation of crooning his canon of greatest hits, visibly starstruck for the cameras, and in two-part harmony with the flesh-and-blood superstar dictator standing right next to him.  And he did it over a satellite feed with the world watching.

That stark visual embarrassment of an American President passing the scepter of “Leader of the Free World” to Vladimort Putin struck like a jolt of electro-shock that shotguns through the cerebral cortex.  The paradigm shift in the Superpower Player’s Guide is that Vlad will do the impaling and President Littlefinger will have his back by handling the indelicate reach-arounds.

Derelict reality has come plummeting through the windshield like a warm corpse.

Welcome to the party, pal.

The TV has been on in the background as I was drafting this post.  Only minutes before publishing, I heard the following on MSNBC from James Rubin, former Asst. Sec. of State  for Public Affairs in the Clinton Administration:

“As much as I believe that it was something terrible that happened yesterday, in all fairness, this is exactly what President Trump and candidate Trump has been saying for two years.  There was nothing fundamentally new.  He has always implied that the Russians didn’t do this; he’s called on the Russians to do things in July of 2016, and what happened was that it all occurred in one glaring television moment with Putin standing next to him.   And that’s what drove everybody to distraction”

I just missed it by a nose.  Kudos, sir.

2018-07-17
Previous Post: “Render unto Caesar the things that are Caesar’s …
Next Post: The Fine Art of Yellow Journalism.