Spare Him His Life from this Monstrosity

Yeah, I know, everyone’s quoting Queen every time they reference Anthony Scaramucci, but don’t hate the game, hate the player who makes himself such an easy fucking target.

Little Douche the Mooch is trying to out-Stephen-Miller Stephen Miller. Remember Stephen Miller, the thin-featured 80s action-movie-villain who swore that the president’s powers would not be questioned? Well, Little Douche the Mooch won’t play second fiddle to such a weaselly looking twerp, and is quickly establishing himself as the second most famous character from American Psycho to come to life in the trump administration (those reflective aviator sunglasses aren’t going to date-rape themselves, you know). So how is he trying to out-Stephen-Miller Stephen Miller? Let’s ask Ryan Lizza, the Washington correspondent for The New Yorker who was fortunate enough to receive an angry phone call from Little Douche the Mooch demanding to know who leaked the details of his dinner with trump, Melania, Sean Hannity, and Bill Shine (the man who inherited Fox News after Roger Ailes pussy-grabbed his way out of his job).

During the phone call, Little Douche the Mooch threatened Ryan Lizza, Reince Priebus, every single presidential assistant, and probably every one of you reading this, because he’s just that swell of a guy.

But LDM wasn’t finished. He then stated that Reince Priebus will soon be out of a job. And then he got mad.

Throughout the call, LDM referred to himself in the third person, even calling himself, “The Mooch”.

As soon as the call ended, two things happened.

2. Little Douche the Mooch tweeted this: 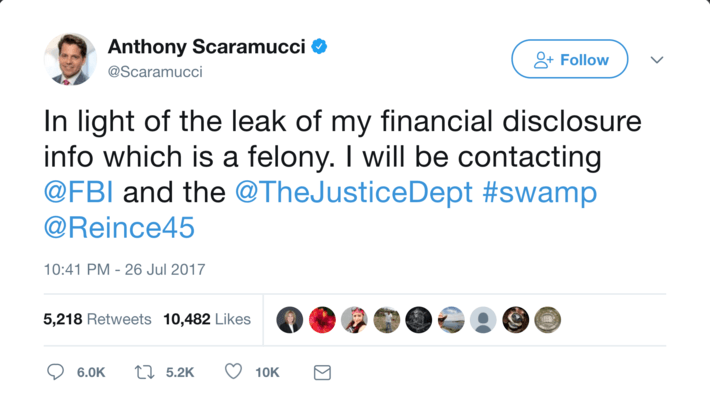 He quickly deleted it, but since the Internet is forever, thousands of media websites immediately saved a screen grab.

What’s that felony he’s talking about?

Well, LDM is about to find himself having to explain away some inconvenient financial gains via SkyBridge Capital. Read all about it at Politico.

We can only hope that someone is working on a set of trading cards for this administration before they all disappear.

2017-07-27
Previous Post: Livin’ on Jacks and Queens
Next Post: Friends in Life are Special. Do You Want Me As Your Special Friend?