Do you like jokes? Funny ones? Knee-slapping, tell-your-friends-the-very-next-time-you-see-them funny? Jokes so goddamned hilarious that Dane Cook would murder his entire family for the chance to finally get a joke his audience would laugh at? Well, get a load of this doozy shared by our president last Friday while speaking to a bunch of cops in New York:

Still laughing? Told you this was funny, didn’t I?

What’s that you say? That doesn’t sound very funny to you? You say it sounds to you like our president just told every law enforcement officer in the nation that anyone they arrest is to be assumed guilty, and that the police should mistreat them to the point of injuring them during the process of placing them in a car for transport?

You say, in a time when police brutality is at an all-time high, that the last thing our president should be doing is giving them his blessing to continue the brutality? Why would you say that? He was joking.

How do we know he’s joking? Well, he sent out his newest public liar to tell us that he was only joking when he said he’d like the police to bash every tooth in your head.

You see, after many police departments around the nation responded by saying they do not endorse police brutality, and would not allow their cops on the street to institute the policy the president seemed to want to put into place during his speech, and after the sane members of the public decried the president’s incredibly stupid comments, the White House decided they better use the Rush Limbaugh defense and claim his statement was only a joke after he learns that the public hated it.

We spend an awful lot of time shaking our heads over the stupid things our president does, but it bears placing shit like this into context.

This is the top executive officer of the nation telling every executive office enforcement person that it’s okay to ignore every last amendment to the constitution, our entire judicial system, and the tenets of our republic and mistreat suspects.

What happens the next time a cop decides to gun down an unarmed citizen? What moral authority does our president now have to condemn the actions of tyrants around the world when he can’t keep his disgusting, ugly fucking mouth shut about police brutality?

And finally, to Sarah Huckabee Sanders…have you no shame? You went on George Stephanopoulos’ show and told him that being honest is how you are able to face your children every day. I suppose you’ve been having their nanny tuck them in, in your stead, seeing as how you have chosen lying for the president over facing your children with a clear conscience?

Oh, and lest we let this go without comment: our foul-mouthed media lothario lasted only 10 days. So long, Scaramucci. You would have been a bottomless fount of fodder.

Here’s your trump picture. If you look carefully, you can see the line where his chin used to be: 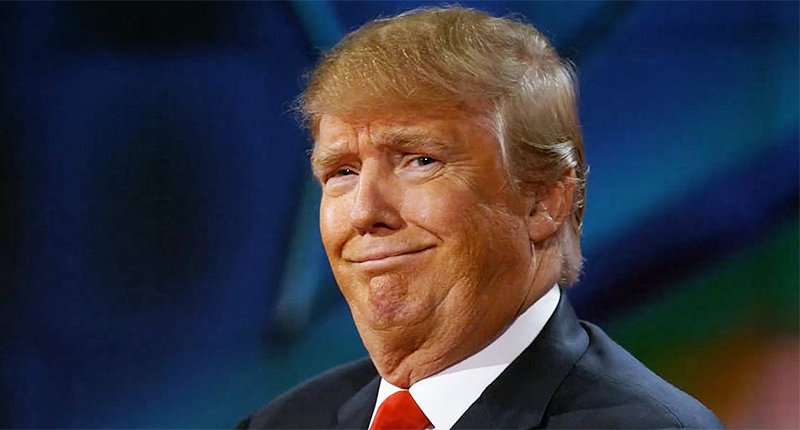 2017-07-31
Previous Post: Friends in Life are Special. Do You Want Me As Your Special Friend?
Next Post: Orbital mechanics of destruction.