By: Luskus_Delph
In: Politics
With: 10 Comments 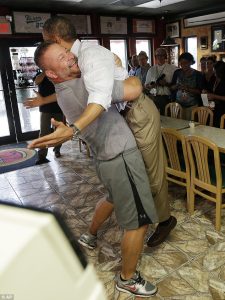 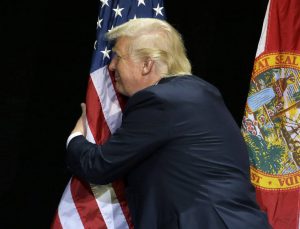 During the Obama years I pointed out the right wing’s indiscriminate and wholesale destruction of anyone who was so unfortunate as to wander – however briefly or haplessly – into close orbital proximity of the Kenyan usurper and black anti-Christ.

There was the Obama/Charlie Crist welcome-to-Florida hug which spurred conservatives into freakout mode, costing Crist a subsequent Senate race and erasing forever the capital (R) behind his name.  And lest we forget; there’s the handshake and hand-on-shoulder embrace between Gov. Chris Christie and the President, arriving at the Newark airport to tour Jersey Shore’s Hurricane Sandy devastation, which sent the GOP base into conniptions.  Christie’s slender hope for a presidential nomination ended then and there.  Political PDAs can be career killers.

No one was spared similar vigilante rope-burns, no matter how lowly in status.

When campaigning in Fort Pierce, Florida, Obama met Scott Van Duzer (see photo), owner of Big Apple Pizza and Pasta Italian Restaurant during a visit to the restaurant and was photographed receiving a spontaneous and gleeful bear hug that made the evening news and going viral internationally.  Wanna guess what happened next?  Angry conservatives flooded the restaurant’s Yelp page with negative reviews and began staging a boycott.

“The next day we started getting hate mail. People were calling in hundreds of dollars of bad food orders…. Here was a white guy who is a Republican and an African American who is a Democrat and president, and we are hugging. I get letters from people saying it lifted the spirit of the country, and that’s pretty wild to hear – here am I, a pizza guy, and I lifted the spirit of the country.”

Okay, that last bit was a tad warm and fuzzy in the end.  But it illustrates the depth and reach of GOP depravity and their base’s dedication to a scorched-earth and to carpet-bombing their way to Pyrrhic victory for Romney in 2012.

Since our national Nantucket Sleighride though the Mar-a-Lago Wormhole, we are in a new universe where music of the spheres sing a different tune.  The harpoon is set deep enough into the Morbid Dick-Monster to sustain 3 1/2 more years of harrowing whiplash and frenetic slip streaming across the rim of the ‘Black Hole of 1600 Pennsylvania Ave.’

We know that President Trump destroys everything he touches (see photo).  Yet his gravitational field exudes a sub-atomic brutality that transcends quantum mechanics.  It has a metaphysical radioactivity that drives all those around him to a kind of perplexing madness that inevitably destroys their careers and themselves.  Lying, obfuscating, obstructing, colluding, grovelling.  Sycophancy, deception, cruelty, self-immolation.  Who knew they had all that within themselves until they cast off their scant swaddles of humanity and shackled themselves naked to a hollow, soulless idol of clay whose very handshake is engineered to pull innocent victims in close enough to set a gravitational grappling hook?

A few disciples, whether through dumbfuck curiosity or sheer recklessness, are like Jimmy Stewart in “How the West was Won.”  They accompany the seductor-in-chief into a cave to “see the varmint” trapped in the shadows of a torch lit abyss and they end up at the bottom of it, face down in trickling spring water with a knife in their back.

The rest, beset by their inner demons and seeking to slake a thirst for power and influence or transient notoriety, simply throw in with the pirates, bound for haven in Tortuga and all the grog and duff they can choke down.  And never knowing when the Captain will wake up a little cranky, and order them thrown overboard.  With a useless ship’s compass tautly pegged to the irresistible magnetism of the Commander; in constant motion, scampering about the decks like a lowland gorilla in aimless combat with unattended luggage; all their incompetent celestial navigation will never point their way home again.

They signed up for this suicide mission.  Whether they meet their end at the bottom of a stone-cold pit or beneath 100 fathoms of saltwater; in the end, it is gravity that placed them there.  Their destruction was of their own making.  The beloved leader keeps punching their tickets while the line for perdition inches forward for those still waiting their turn at the tail end of the queue.

“Is this the line to lose half my shit?  Awesome.  This is gonna be great!  Oh look, the line’s moving.  I’m one step closer to my own personal hell”   — Bill Burr

[Authors note:]  If you would like to see something jarring,  click here for “obama hugs” in Google images search and see what you get.  Go on; scroll to your heart’s content.  Next, check “trump hugs”  and scroll through that result.

Uh huh;  startling contrast, isn’t it?  You will stop smiling….eventually.