The Shade Felt ‘Round the World

By: Imbecile
In: Politics
With: 0 Comments

“I don’t see this President-elect as a legitimate president.”

On March 7, 1965, Congressman John Lewis was then just a young man making a name for himself in the Civil Rights Movement making his way across the Edmund Pettus Bridge in Selma, Alabama, when armed state police officers fell upon his group of marchers and used their night sticks to crack Lewis’ skull open. Lewis continued on, and crossed the bridge.

That was not the first, nor was it to be the last time that John Lewis would be violently assaulted for taking a stand for what he believed in.

John Lewis’ willingness to put his own life in danger on many occasions in order to secure equality and equity for his fellow citizens earned him the respect of a nation, and helped get him elected to Congress in 1986, where he has spent the past 30 years continuing to fight the fight to bring equality and equity to all Americans.

John Lewis is so respected that when he speaks, people stop and listen.

On Friday, January 13, John Lewis spoke words he probably never believed he’d have to speak—not even as a young man fighting a system that viewed him as less than a human being.

While being interviewed on MSNBC, John Lewis told Chuck Todd, “I don’t see this President-elect as a legitimate president.”

Let’s see how courageous his fellow Democratic congresspeople are.

president-elect donald trump’s Inagural entertainment line-up was announced today. Performers will be Toby Keith, 3 Doors Down, and Lee Greenwood. I didn’t realize they were all still alive, either.

How do you not know your boots will do this?

Conal International Trading Company apparently went through the entire production process without ever asking themselves, “What will the bootprint look like?” when they designed these: 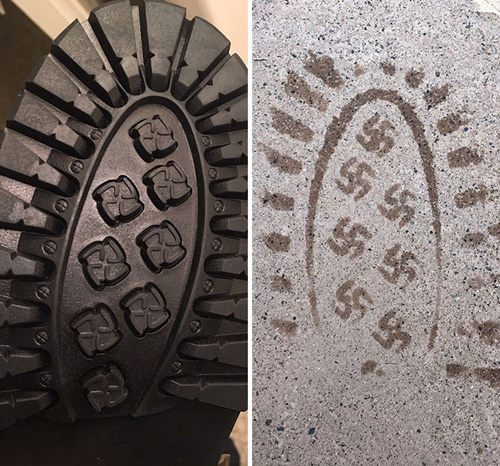 The company apologized and recalled their boots, and here is a portion of the statement they released:

“We would like to issue our sincerest apologies to our customers and to anyone who was offended by the Swastika imprint that the boots left behind.”

Thanks. But why did you capitalize the word swastika?