Can’t Take My Eyes off of You

The NSA and FBI tell Congress that Russia did not influence electoral process. pic.twitter.com/d9HqkxYBt5

Someone paying attention to Twitter informed the members of the committee, and shortly afterwards, Jim Himes of Connecticut read the tweet in Congress to Director Comey and asked for his response. Comey said, “We’ve offered no opinion, have no view, have no information on potential impact because it’s not something we looked at. It certainly wasn’t our intention to say that today because we have no information on that subject.”

trump just can’t get anyone in the intelligence community to stick up for him.

Meanwhile, Director Comey revealed that intelligence agencies believe that Russia’s motive for interfering in our election was to hurt our democracy, hurt Hillary Clinton, and help donald trump. This deserves a moment to let it sink in. The director of the FBI told the House Intelligence Committee today that Russia knew that helping trump win the election would have the added benefit of harming our nation. Think about that.

Finally, to cap a really shitty day for the White House, Sean Spicer had to run away from his own press briefing after National Journal’s George Condon asked Spicer if reporters could assume that if Spicer read a newspaper article from the White House podium, that he was vouching for the article. This was in clear reference to Spicer’s reading of numerous press pieces to defend trump’s claims that his wires were tapped by President Obama.

Spicer replied that assuming reading from all those articles to defend the president’s claims was a “sill assertation”. Hopefully, Spicer meant that it was a silly assertion, and not a silly assertation.

Anyway, Condon followed up by asking Spicer about conversations Spicer had with British officials to smooth over relations following the insinuation that it was the British who tapped trump’s wires at President Obama’s behest.

This question caused Spicer to unceremoniously end his press briefing, and leave a smear of gray across TV screens around the nation as he beat a hastier retreat from his podium than Scooby Doo and Shaggy escaping the clutches of a glowing haunted house specter.

There are two possible reasons for the similarity.

Clearly, the only solution that makes sense is #2.

But who am I to make that conclusion for you? Decide for yourself, but if, as a result, you are paid a midnight visit by goons in dark suits, don’t put that on me. 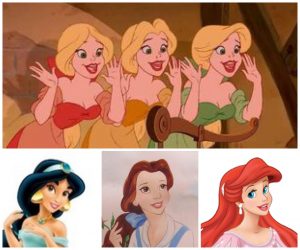