“So you’ve been to school for a year or two, and you know you’ve seen it all….”

I was a junior in high school in 1986 when I was walking down the hall one day behind a senior who was wearing what at first glance appeared to be a concert tour shirt. When I got closer to him in the hallway, I saw that it was a…satirical?…shirt that was something along the lines of “Hitler: European Tour 1939-1945” with a list of all the countries he invaded and the dates he invaded them. I remember something about the image of the Nuremberg Stadium with the swastika sitting atop it on the shirt.

I remember thinking, “That shirt can’t be a very smart idea. Why is he wearing it?”

Not too long afterward, our principal arranged to have a Holocaust survivor come and speak at our school. I don’t know if the two events were in any way related.

I remember being mesmerized by the speaker, and trying to wrap my head around what she had endured. She was high-school age when she and her family were taken. She was her family’s only survivor. I also remember wondering what the hitler-t-shirt-wearing guy was thinking as he listened to this woman speak. Did he reflect on his decision to wear a t-shirt that trivialized the Holocaust? Did he give it not a single thought?

I never saw him wear that shirt again. I also never witnessed any other overtly irreverent display of historical ignorance like that again while I was in high school.

On Thursday, February 2, 2017, Groundhog Day (the day memorialized by Bill Murray in a movie in which his character is forced to relive the same horrible day over and over again for years until he learns the lesson the universe intended him to learn that day—ironic, no?), a brief news story ran on a few blogs and news sites here and there. The story was about Cypress Ranch High School in Houston, Texas. Apparently, during a senior class photo, dozens of high school seniors gave the Hitler salute and yelled, “Heil trump!” According to students alarmed by what they witnessed, neither administrators nor educators said anything, until one of the students tweeted the photo, and administrators became unhappy with their sudden fame. 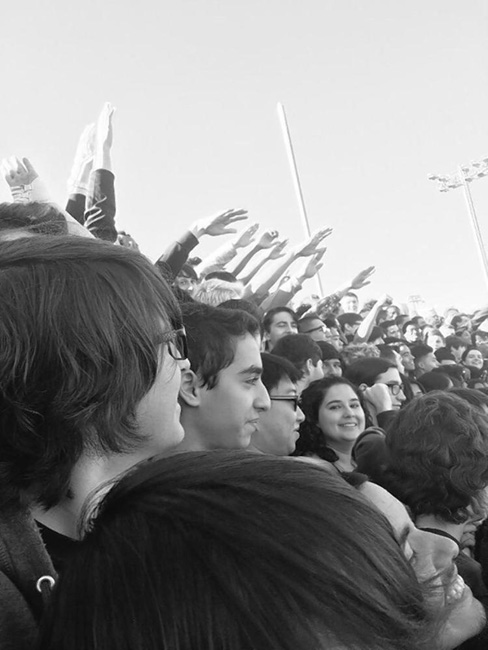 Seeing this photo and reading the story, I was reminded of that high school student from 1986, or more precisely, I was compelled to wonder what makes teenagers misunderstand the weight of such histories? Is it what is described by the Dead Kennedys’ lyrics above? They’re just young, naive, and don’t understand the impact their actions have?

Part of being a teenager is to attack the sacred cows of their elders as part of the process of establishing a firm identity of their own. Without the proper context to understand the weight of such historical events, teenagers only know that something like the Holocaust is something “grown-ups” revere as above satire. Without the wisdom of experience, a teenager mocks this reverence, much to the horror of adults who know better.

The problem here, to me, isn’t that the teenagers did this, it’s that the adults did nothing about it. The students don’t need to be punished (they live in the age of the Internet; they’re about to learn a valuable lesson in how poor choices can haunt them for life), they need to learn why the Holocaust is a sacred cow whose mockery doesn’t play well. They need to understand that the kind of suffering inflicted during a time of genocide is not a fleeting suffering like getting acne before a date, or doing poorly on a test. Genocide can destroy the fabric of the society it infects.

The adults here missed an opportunity to teach the students a lesson larger than to simply say that treating the Holocaust sardonically results in being punished.

I occasionally think about that boy in the hallway of Montgomery High School way back in 1986, and where he is now as a grown man. Does he remember his shirt? Did he keep it as a memento? What are his thoughts today? What would he say to these Hitler-saluting high-school students today if he could speak to them? I would like to think he’d tell them that their actions carry weight, even if they don’t recognize it. I’d like to think he’d tell them not to worry too much about this, but not to shy away from taking responsibility for their decisions. I’d like to think those high-school students would be a bit more reflective about the consequences of their actions than our president will ever be.