I had a conversation today with a resentful right winger. He tried to play the Democrats-are-the-racists-because-Lincoln-freed-the-slaves-and-he-was-a-Republican-and-the-Democrats-started-the-KKK card in our discussion.

One of the other conversation participants mentioned the Dixiecrats and his response was, “Oh, the Dixiecrats! You guys always bring them up.”

By that time, the conversation was winding down, but that stuck with me.

When we are having a “discussion” with right wingers on the Internet, there is always this effort to explain how the parties flip-flopped on their ideas of race, and how the Civil Rights Movement was the final straw that sent Southern Democrats (Dixiecrats) to the Republicans for the foreseeable future.

Now, there is truth to what he said. The Democrats do not have a clean racial record. Strom Thurmond was a Democrat. Jesse Helms was a Democrat. The Democratic Party has a sketchy past and it doesn’t serve us to defend our party on those grounds (see my January post 10 Rules for Dealing with Trolls in the trump Era). Instead, we have to change the discussion, because all it exists as now is:

This is a monumental waste of time, and it will never give the right-winger pause to think about why they get accused of racism.

Instead, I’d like to know why right-wingers are so determined to portray the Democrats as the party of racists. It seems they are less interested in demonstrating that they aren’t racists than they are in proving that we are. What purpose does that serve?

To me, the answer is simple: votes. Nothing more, nothing less. Though those votes are intended to be swapped out for actual power in the end.

The RNC realized that they do not have the ideas that Americans want. Their policies are wildly unpopular—from taking health care away from the poor to giving the wealthy tax breaks to starting wars just to test out their new toys.

Before 1980, presidents weren’t overly concerned with proving their biblical bona-fides. Sure, we were as discriminatory as ever (JFK’s Catholicism was seen as a detriment), but we were, for the most part, unconcerned about determining which candidate was Jesus’ favorite.

The GOP saw fundamentalist Christians as a great, untapped voting base, and pandered to them via Jerry Falwell’s Moral Majority (which was neither, by the way) during the 1980 election.

The success of this endeavor proved to the GOP that they never had to win over the majority of Americans. They only had to pander to individual voting blocs: the fundies here, the gun-nuts there, over here are the Southerners still smarting from the passage of the Civil Rights, and over there are the neck-bearded men’s rights advocates.

The GOP decided to treat elections as boutique events. Promise to deliver to each little special interest everything they want, without ever intending to do so. Instead, vaguely promise legislation, then talk about those obstructionist Democrats who just won’t let them get those anti-abortion laws passed, gosh darn it, but vote for more of us, and we’ll get them wimins locked up fer havin’ the nerve to think they could make their own decisions.

Ever since the passage of the Civil Rights Act, the Democrats have treated “the minority vote” as a foregone conclusion. The DNC has sat back, propped up it’s feet, stuck that little stalk of wheat in it’s mouth, leaned back in the chair, put its hands behind its head, and just watched the minority vote come sweeping in.

For the GOP, nothing could be sweeter than stealing one of these last boutique votes away from the DNC.

The GOP views every voting bloc with a sense of cynical contempt. They hate having to pander to them (Reagan was famously secular, but did the ol’ Hebrew Two-Step with great gusto in order to secure that vote), but they love the power such pandering results in. So they hold their nose, pretend their souls wept for the victims of the Pulse night-club shooting in Orlando in 2016, and sit back and wait for the votes to come pouring in.

This is what the minority vote represents to the GOP. It is nothing more than a feather in their cap. It’s their way of walking into a bar, sidling up to the woman or man you’ve been chatting up for the last hour or so, and stealing them right out from underneath you. They have an STD, and have no designs on a relationship. They just want to get laid, and they just want to humiliate you in the process.

This is why they want/need so badly for everyone to begin believing that Democrats are the “real racists”.

This is how we have to approach them when they begin squealing those lines.

Any other approach will be ineffective.

Here it is, your trump picture: 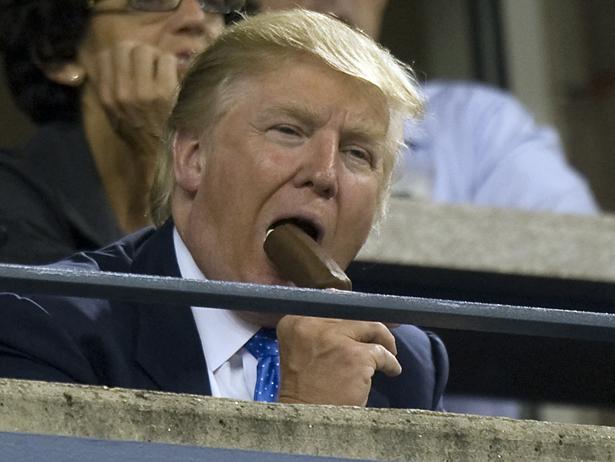