Just Look at What the DNC Was Wearing

On Saturday, trump continued his Putin love-fest, tweeting, “Having a good relationship with Russia is a good thing, not a bad thing.” He further concluded that only “stupid” people don’t want good relations with Russia.

While it is arguable that good relations with all nations is a good thing, those good relations should not be based on us ignoring the bad things those nations do.

Meanwhile, in trumpland, where plagiarism is just good speeching and writing…

Following in the footsteps of Melania trump lifting portions of a Michelle Obama speech, trump pick for director of strategic communications of the National Security Administration, Monica Crowley, is having trouble keeping her own secrets, namely, that she is a blatant plagiarist.

A review of Crowley’s 2012 book, What the (Bleep) Just Happened?, found that Crowley is either too lazy to write her own works, or is just so unimaginative that she just steals entire passages from Politico, The Wall Street Journal, The New York Times, The New York Post, the BBC, and Yahoo News.

It was revealed that Crowley’s book contains at least 50 instances of plagiarism. 50!!

The trump team is, thus-far, standing by their second-favorite cheater.

After fawning over his replacement on Celebrity Apprentice, president-elect donald trump wasn’t quite as magnanimous towards Arnold Schwarzenegger following the ratings debacle that was Schwarzenegger’s Celebrity Apprentice debut. The president-elect tweeted (of course): “Wow, the ratings are in and Arnold Schwarzenegger got “swamped” (or destroyed) by comparison to the ratings machine, DJT. So much for….[]being a movie star-and that was season 1 compared to season 14. Now compare him to my season 1. But who cares, he supported Kasich & Hillary”

Finally, some good news (and it’s about a cat) 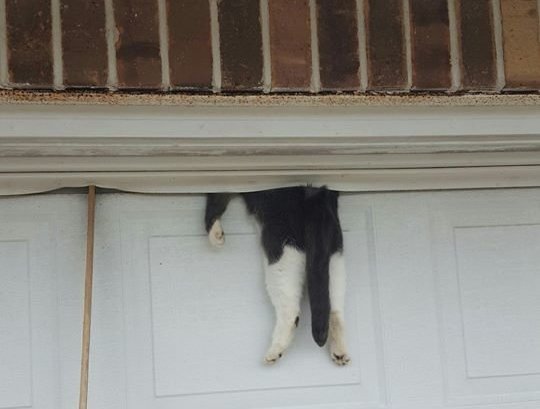 was unhurt after getting trapped at the top of a garage door in Ascension Parish, Louisiana. Neighbors came together to help rescue the cat by removing the molding around the garage door so the cat had space to get out.

2017-01-07
Previous Post: Antonin Scalia and the Supremes
Next Post: 10 Rules for Dealing With Trolls in the trump Era