What the hell. Why not?

By: Luskus_Delph
In: Uncategorized
With: 15 Comments

…trump and his fascist followers…are bitter that they were born too late to partake in the Third Reich, and would look for ways to make America their own private Nazi-land.

We’re watching it happen. How far will we let it go?  –Imbecile 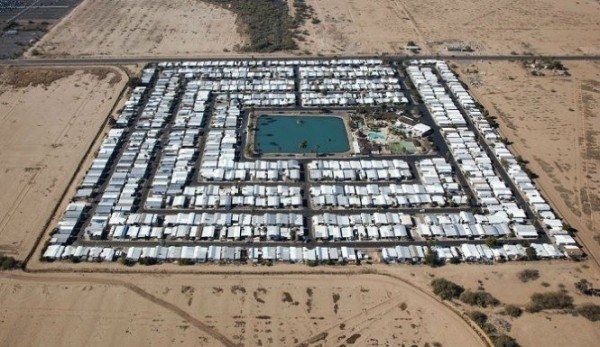 President Trump’s Federal Emergency Management Agency has announces that it has officially re-opened the first of former-President Obama’s “Political Realignment Facilities” in Willcox, Arizona.  This type of facility was more commonly known as a “concentration camp,” or even a “death camp” during his tenure in Washington.

According to Breitbart News, the agency plans to re-open four other facilities next year, and to have a total of twelve back up and running before the 2020 election.

This first facility (see photo), formerly known as “Camp Alpha,” was built on 500 acres of Federal property near the Chiricahua national park in southwest Arizona and abandoned in January of this year.  These facilities were ordered and authorized by two-dozen executive orders by President Barack Obama, beginning the day he took office on January 20, 2009.  They will now serve as camps for liberal-leaning Independents who openly disagree with the Trump administration, as well as currently registered members of the Democrat Party.

In an interview with Breitbart News, Counselor to the President, Kellyanne Conway said:

“This flagship facility of the The Trump Organization Re-investment Initiative, in partnership with FEMA, has been re-named “Resort Bigly.”  The First Daughter and Advisor to the President has been tasked with the renovations and outfitting of the facilities, providing lavish selections of Trump™ trademarked furnishings and decor.  Limousine-liberal guests will enjoy wearing Ivanka’s tastefully designed uniforms from her own retail fashion line.  The men will feel like Captains of Industry in matching chain-linked ankle bracelets in gold or brushed pewter from the Trump Collection®“

Trump Senior Advisor, Jared Kushner, has been operating behind the scenes to prepare an action plan in the event of a liberal revolt, that will not only squash a revolution, but kill many of its participants.  During the course of this revolt, many will die, both in battle and in the camps — an inevitable circumstance President Trump is already preparing for and has ordered $1 billion dollars worth of disposable coffin liners being manufactured and imported by companies owned by Trump scions, Eric and Donald Jr.

Unnamed sources nervously roaming the halls in the West Wing say that suspects have been identified by Russian cyber-security allies monitoring Facebook status updates, Tweets, blog posts, and through private conversations intercepted by civilian agents-at-large, in an on-going program of surveillance code-named “Rosebud”.

Reaching out by telephone to several Democrat spokespersons for comment on this article, National Inquirer was redirected to the Department of Homeland Security’s MAGA (Matriculation And Guest Accommodation) switchboard.  Voicemail requests for contact information are still unanswered.