By: Luskus_Delph
In: Culture
With: 0 Comments

In preceding weeks he revealed that he was developing a new piece of material called, “There’s Too Much Fucking Music,” and planning to start organizing his filed collection of ideas for his next book; while certain that “there’ll be another HBO show as these pieces on stage begin to take form.”   But mortality intervened to have its way with him much too soon for anybody’s liking.

The global economic meltdown was little more than an ominous rumbling in the bowels of Wall Street; and the presumptive Presidential nominees were Senators Barack Hussein Obama and John McCain.  The Republican Party’s base had begun stripping off their Bush/Cheney patches and bailing out as that regime’s engines were sputtering to a precipitous stall.  Sarah Palin was still an unknown, lipsticked Pentecostal pit-bull, selling moose jerky and Yokumberry Tonic from the front porch of the Governor’s Putin-watch Outpost in Alaska — and ’twas yet a dim twinkle in the eye of terminal Neocon cyclops and failed myopian soothsayer, Bill Kristol .

I gotta tell you, George; as various posthumous retrospectives of your career were gradually unfolding, Liberalism seemed on the verge of a Renaissance, while the maelstrom of Conservatism was careening towards a reboot of shipboard hooliganism in Boston Harbor and a Colonial Williamsburg fashion revival.   Please, sit down George, and we’ll tell you everything you’ve missed.  A writers’ mother lode.  An eight year retrograde tantrum leading right into this freshly ladled orphans’ gruel of dumbfuckery that greets us every morning at breakfast, that’s all.   Yes I know, George.  You really  tried; but we blew it anyway.  Sorry, man. 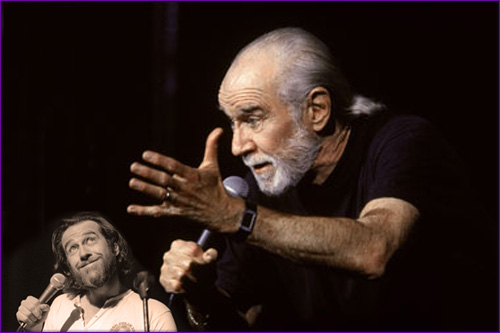 The rich and textured matrix of Carlin’s imagination had for years been conjuring all manner of foibles, and awkward tripwires rooted within our culture.  His standup comedy was an anamorphic mirror that reflected our own distorted frailties and absurdities back upon us with imposed clarity.  His political diatribes were dire warnings wrapped in alternate layers of reality, fantasy, and dark humor that he delivered with the wrought iron certainty of seasoned philosopher.

“I don’t really feel like an American or part of the American experience,…and I don’t really feel like a member of the human race, …I know I am, but I really don’t… I think I have found a detached point of view; an ideal emotional detachment from the American experience and culture; and the human experience and culture, and human choices…. If you belong to something, it owns you, and I just don’t care for that.  I like spinning out here like one of those subatomic particles that they can’t quite pin down.”

His manner of delivery could easily be mistaken for hostility, but…

“I’m not an angry person; just very disappointed and contemptuous of my fellow humans’ choices—and on stage those feelings sometimes are exaggerated for a theatric stage… people mistake it for a personal anger, but it’s more dissatisfaction, disappointment and contempt for these things we’ve settled for.”

Much of Carlin’s contrarianism was imbued with a veiled empathy for individual struggles vs. routine conformity:

“One on one with people, I have great capacity and great compassion…  I see individuals; I see their individual beauty.  I’m aware of the potential… When you look in their eyes, you can see a hologram of the human species and you kind of know what we could have been.”

Often Carlin’s profanity-laced humor could teeter between savory and vulgar. His command of language and cadence could toe the line between poetry and doctrine.  Words were his medium and he thought in paragraphs:

“Solders and sailors, policemen, firemen, and athletes, were objects of childhood hero worship. We all know how they talk.  So apparently these words do not corrupt morally. This was the thing I couldn’t put together.

There’s no shock value left in words.  Humor is based on surprise, and surprise is a milder way of saying shock.  It’s surprise that makes the joke.”

Carlin often admitted that it was the acts of creation and crafting that gave him the most satisfaction in his profession:

“First of all, I’m an entertainer; I’m in the vulgar arts. It’s my primary delivery system… in my early years, when I would do an interview, …I would say I am a comedian who writes his own material.  And then at some point, I discovered what I really had become was a writer who performs his own material.”

Carlin had the deepest respect and appreciation for the symbiotic dance with his audience, particularly when he was delivering set pieces of word-for-word recitation while calibrating to their spontaneity in real time:

“…the audience is a single organism; and it’s you and it…  It’s like the feeling of conducting an orchestra.”

One cannot help but speculate on what George Carlin would have to say about the chaos and unrelenting stream of insanity that is the metronome for our current lives.

Perhaps nothing more than; “Well, I told you so.”  Now that all the demons of asininity that he exposed within our culture and body politic have descended like vultures for their bite.

—This essay was written for and dedicated to our friend, Lancelot Link.  Because I can! –LD